Today was certainly a step in the right direction. Now all four wing pieces have been bolted on and the Waco is looking very much like its old self again.

We had a considerable amount of help from the very friendly and cooperative people at Euralair (whose mechanics and giant jet hangar we are using). At one time we had as many as seven people assigned various positions in the wing attachment process. It was an amazing sight to witness. One Frenchman who spoke no English, operating the fork-lift, holding the upper wing in place, while 3 other Frenchmen, who spoke little to no English, manipulating the wing according to Carl's directions (Carl speaks no French, and in fact hardly speaks at all!), while at least two other Frenchmen were fetching things, being ordered about by the only Frenchman we could (barely) communicate with, and all the while I'm pacing all around worrying that at any moment this zoo would produce an irrecoverably broken biplane, uttering the only French I knew appropriate for the situation ("Petite", "merci", STOP!!). Notice that I speak English in emergencies, and my French is limited to say the least, and I seem to slip in a few Spanish words among the French, which confuses everyone, even me.

Here's a quick snapshot I took of Carl using sign language to direct the wing to its proper place: 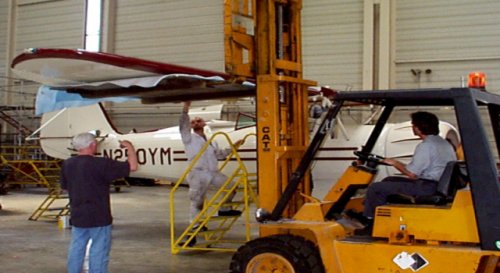 Somehow, it all worked. The wings are on.

There is still quite a bit to do. Carl (the world's greatest Waco biplane pilot, and also the Chief Pilot and Quality Control Manager of the Waco factory) is having a real challenge with the fittings which attach the elevator to the horizontal stabilizer. He is a perfectionist (and so am I!) and it is unfortunate that he doesn't have access to his own tools, so the work is going a lot slower than it would at the factory.

And there are still the hundred other details to be done: wires for lights, radio antennae, GPS, movie camera, control cables, interwing struts, flying wires, wheel pants, wing root fairings, brakes.... the list goes on. At some point Carl will stand back and shrug and then climb in and go fly it!

We had lunch with Francois Bricheteau, the Directeur General of Euralair, and his friend Alain Strausz, a retired French Navy pilot and now flight instructor. They escorted us to their favorite local cafe and it was a good thing because this was no tourist spot with menus translated into English. And the staff spoke no English either. Thankfully, our new friends translated everything and made suggestions and we had a great meal. Alain offered to accompany Carl on a first flight out of LeBourget to a little grass field airport where we can buy navigation charts of the area. From the way Alain's eyes light up when he looks at the Waco, I would imagine he would offer to go in the biplane if Carl were going to Antarctica!

All day long, as we were working on the plane, groups of people came wandering over to "Ooooh" and "Aaaaahhhh" and point and look it all over and talk quietly among themselves. It was almost as if they had never seen such a plane before. In fact, they may not. I have not seen another biplane of any kind since I have been here, and I am told they are quite rare in Europe.

It seems unlikely that we will fly tomorrow because of all the work which remains, but possibly on Wednesday. Wish us luck.