Today's big accomplishment was the move to a new hotel at Charles de Gaulle airport from our hotel (of the same chain) at LeBourget airport. It was necessitated by the fact that the rooms at the LeBourget hotel had been sold out for two years in advance. Everything around LeBourget is sold out in fact. The Paris Air Show gobbles up everything for miles. Not only are the rooms not available, they sell for 4 times the normal rate. It seems that the Law of Supply and Demand works just as well in France.

My room at de Gaulle was quite a bit nicer than the one at LeBourget. I have a window which opens to the fresh air (the other room didn't), and the best part is that it looks directly down the departure end of what must be Runway 26 Left. I'm guessing at the runway number, but I am using the compass in my watch to determine the runway direction.

The watch also contains a barometer which can therefore calculate and display the current elevation/altitude, an air temperature sensor, depth underwater, stopwatch, calendar, alarm, memory, as well as graphing capabilities for changes in altitude and temperature. Oh yes, it also tells the time! I use this watch as my backup instrument cluster in the event that I lose all electrics in the biplane and my wet compass goes FUBAR. This event is not likely to ever happen, but it's comforting to have it around. Just before leaving for this trip, my Bruguet selfwinding timepiece decided to become completely unreliable (compared to its normal characteristic of being just somewhat unreliable), so I'm now wearing this monster Casio.

Tomorrow we re-assemble the biplane. We need to attach the wings, the elevator, the wheel pants, reconnect fuel lines, antennae, electrics, then refuel and ground test the engine and instruments. If we are lucky, Carl may even get to test fly it. Figuring that everything will go well, we should have a couple of days to go flying over the French countryside, exploring some grass fields for landing practice. Oh boy, good fun at last!!

It has been WAY too long since my last flying. I NEED to fly again soon or I will surely spontaneously explode. Only my pilot friends will understand this.

Tomorrow I will try to find navigation charts of the local area, and discover the procedures for flying in and out of the very busy jet airport of LeBourget. Two days ago, as we were unloading the Waco from the truck, there was a French jet fighter doing low level aerobatics directly over the field. The traffic will only intensify over the next few days as planes of every conceivable description come in from all over the world.

There has been further skepticism regarding whether I am really in Paris. It seems yesterday's photo did not show any noticeable Parisian landmarks so today I enclose a photo taken yesterday at the Eiffel Tower. Hopefully this will put the issue to rest. 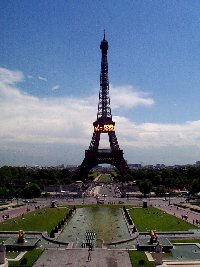